GONE WITHOUT A TRACE - What happened to Flight VH-MDX. 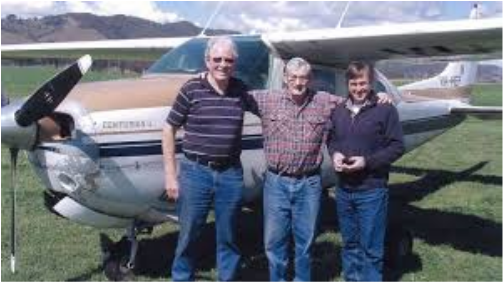 Pilot Nick McGlone with Don Readford and Gary Donovan at Gloucester airstrip. The Cessna 210 in the background is similar to the one that disappeared in the Barrington Tops in 1981.
DON Readford vividly recalls the night the Cessna 210 VH-MDX vanished without a trace.

“I was at the Bankstown Royal Aero Club the night the flight went down - the home base of the aircraft,” he said.

“I didn’t know any of the people on board personally, but when an aircraft goes down ... there is a real feeling of what might have happened.

It was a bitterly cold and miserable Sunday night on August 9, 1981, when Cessna 210 VH-MDX crashed somewhere in the Barrington Tops.

The bodies of the five men on board have never been recovered, nor has any trace of the wreckage been found.

Many rumours circulated around the missing aircraft and its occupants.

There was even a belief that the aircraft disappeared into the Tasman Sea.

According to Don, none of the rumours have any substance whatsoever.

When Don relocated to the local area 12 years ago, a chance meeting with Gloucester resident Norm Bignell rekindled his interest in the events of August 9, 1981.

Information he received from Norm and later from the man initially charged with finding the wreckage - former Newcastle police rescue squad chief Peter Anforth - started the quest for answers.

The end result is a comprehensive account of the final hours of Cessna 210 VH-MDX, completed by Don and Gary just a few weeks ago.

‘Operation Phoenix: the theoretical search for the crash site of the Cessna 210’ uses flight data, interviews and research gathered in the years since the plane went down to provide an estimated crash time and also hypothesises where the final resting place of the aircraft and its five passengers could be.

In addition it tries to shed some light on why the aircraft was never found.

The plane had taken off from Coolangatta in Queensland at 5.02pm on Sunday afternoon.

Pilot Michael Hutchins was confident he would have his four passengers back at Bankstown in a little over three hours.

Hutchins took the coastal route from Coolangatta and was set to turn inland at Taree. The plane would pass over Singleton before continuing on to its final destination.

Shortly after 7pm the plane was detected by an IFR (instrument flight rule) reporting tower near Craven, atop Berrico Ridge.

“The meteorological conditions that existed that night over the general area of the Barrington Tops were considered to be some of the worst ever recorded,” Don said.

“Sleet was reported in the Mount Royal area and to the east of Upper Rouchel.

“Due to the conditions, Sydney flight service asked the pilot if he would like to track to Bankstown via Williamtown.

“But they couldn’t get clearance through the Williamtown control zone so the pilot decided to continue according to his original flight plan.”

At 7.10pm a Gresford woman, travelling between Stroud and Gloucester on the Bucketts Way, spotted a low-flying aircraft to the west of Craven.

“In order to identify the IFR tower the pilot was using his landing lights,” Don said.

At least three other people confirmed they had seen the same plane orbiting to the west of Craven at about 7.10pm.

About 10 minutes later the plane was spotted flying over Mount Mooney.

“At 7.18pm the pilot radioed he was flying over Craven, when he was actually halfway to Mount Mooney,” Don said.

“Somewhere between Craven and Mount Mooney is where we believe the aircraft’s instruments failed.

“Shortly after the plane was seen flying over Mount Mooney, the pilot reported that he had lost his flight instruments and that the aircraft’s exterior surface was icing up.”

Using other confirmed sightings of the plane as well as radar reports from Williamtown and recorded interviews between the pilot and flight control, Don and Gary were able to piece together the exact route Cessna 210 VH-MDX had taken before it crashed.

In the final 20 or so minutes before it crashed Cessna 210 VH-MDX was seen at different locations all over the Barrington Tops area, often circling and crossing its flown path.

“At 7.45pm Williamtown radar indentified the plane near the Mount Allyn lookout in the south-western corner of the Barrington Tops national park,” Don said.

“At 7.47pm the plane was picked up on radar again over the Gloucester Tops escarpment.”

The last time the plane was seen on radar was between the escarpment and where Don and Gary believe the aircraft crashed, on the south-western side of Scattered Top.

“Because the plane was severely iced up, it would have been sucked down into the basin.”

At 7.48pm Hutchins made his final radio broadcast.

“The final question for Gary and I was how far did they travel in that final 50 seconds or so from when they were last seen on radar to when the aircraft crashed.”

By working with pilot Nick McGlone, the owner of a Cessna 210 virtually identical to VH-MDX, Don and Gary were able to pinpoint an area on Scattered Top they believe to be the final resting place of the aircraft.

The pair has also hypothesised why the aircraft was never found by search teams.

Thousands of hours were spent combing the Barrington Tops looking for the plane.

“The aircraft still had a lot of fuel on board - enough for about two and a half hours worth of flying,” Don said.

“We believe that when the aircraft impacted with the upper mantle growth both wings parted from the fuselage, taking the main fuel cells, while the fuselage speared on.

“Because the wings never impacted with anything electrical they never exploded, hence the crash didn’t leave a scar.”

Don said without the testimony of many on the ground who saw the plane on its doomed flight, the task of compiling the final flight path and ultimately what happened to the aircraft would have been nearly  impossible.

“We’re terribly grateful to all those

people that accurately recorded the time when they saw the aircraft,” he said.

He said he was hopeful that the

document - copies of which will soon be available in Gloucester library - could lead to the discovery of the crash site.

“People said the Southern Cloud would never be found and it was,” he said.

“I’ve been speaking with Squadron Leader Bernie Nebenfuhr from RAAF Williamtown who is now in the process of putting together an experienced search team to go and look for VH-MDX.

“Depending on weather conditions, it is proposed to initiate a search around mid-March and to continue probing when circumstances and time permit.

“The failure to locate the aircraft in the years since the crash is nothing short of a tragedy.

“I hope that one day soon the wreckage is located, to bring closure to the families of those on board that died.”